Realme 8 5G is all set to launch in India on April 22. We already know that this phone will be launched on April 21 in Thailand. the Chinese phone maker confirmed that the Realme 8 5G will indeed launch in India on April 22, and the launch event will be streamed live on the company’s Facebook page and YouTube channel starting 12:30 PM IST (7 AM UTC). It will be powered by the MediaTek Dimensity 700 SoC and feature a side-mounted fingerprint sensor. The phone is seen to feature a hole-punch display with the cutout placed on the top left corner of the screen.

It is teased to feature a 6.5-inch hole-punch display. The 8 5G will be 8.5mm thick, weigh 185 grams, and have two color options – Supersonic Black and Supersonic Blue. The phone is seen to have a slight chin at the bottom, a 3.5mm audio jack at the bottom edge, and the SIM tray is seen on the left spine. The smartphone will also feature a triple camera setup on the back, with the main camera using a 48MP sensor. Realme 8 5G is also teased to pack a 5,000mAh battery. 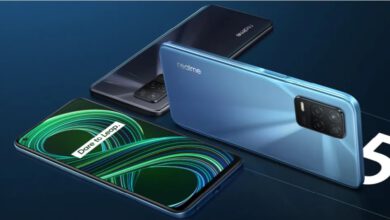