Realme C12 is an affordable C-series smartphone from the house of Realme. The highlighted feature of the phone is it’s big 6,000mAh battery that supports fast charging, this is the plus point for this next Realme C-series phone to draw buyers. Adding more, This phone comes fitted with a 6.5-inch display with a waterdrop notch. This a multitouch display with an HD+(720x1600px) resolution. It  is driven by MediaTek’s entry-level Helio G35 SoC with 8-performance cores that clocks at a speed of 2.3GHz. The phone runs on Realme UI based on Android 10. 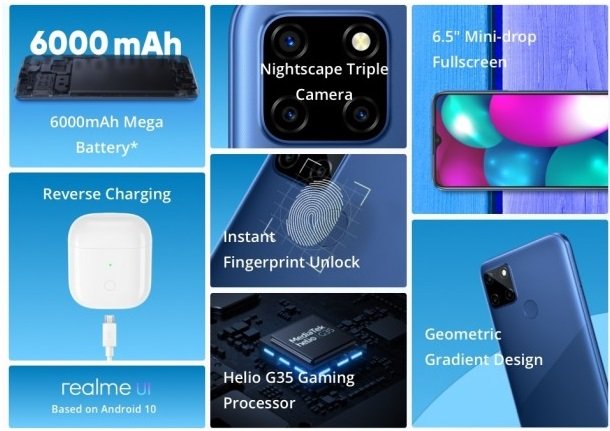 The main 13MP camera with f/2.2 is followed by a 5MP depth sensor with autofocus. For selfies and video calls, the phone houses an 8MP camera inside the notch. As far as the video recording is concerned, you can record FHD 1080p videos @30 fps using the main rear camera. the phone has 3GB of RAM. Realme C12 has 32GB of internal storage capacity that can be used to store apps and games. Also, there’s an expandable slot to stretch the storage up to 256GB.